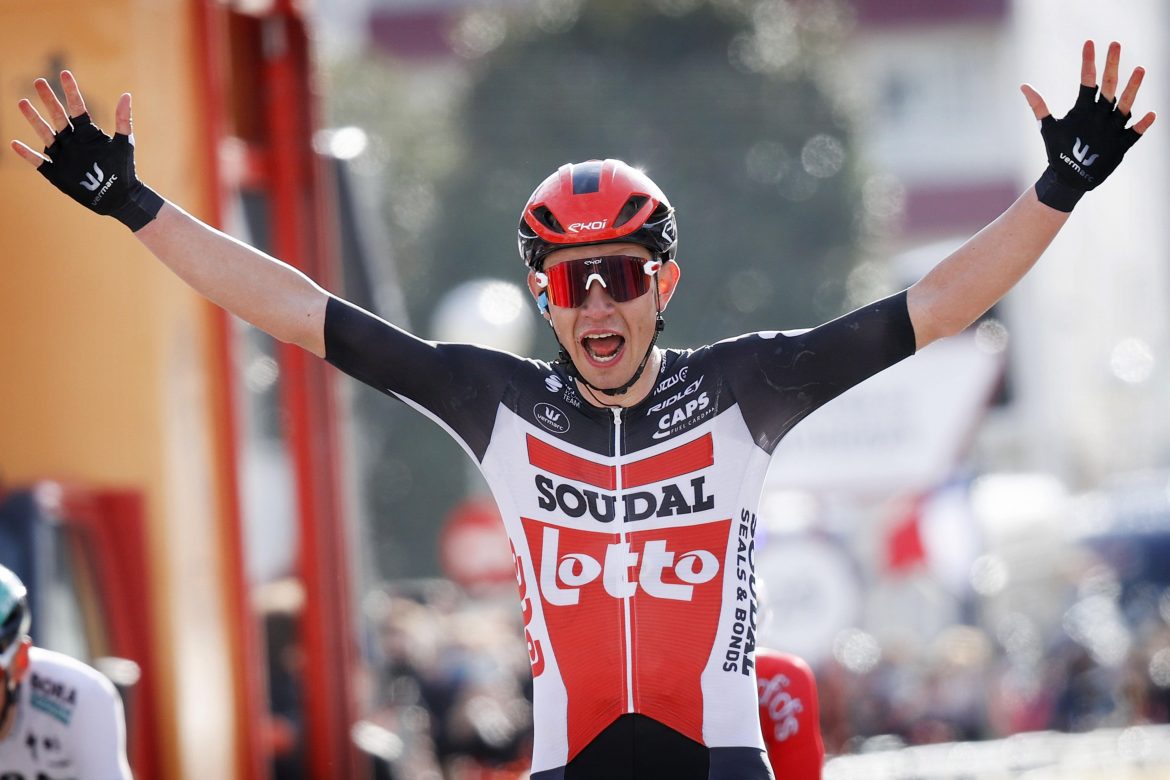 Lotto Soudal’s youth scores again. The team’s Danish rider Andreas Kron won a four-up sprint in Calella ahead of Luis León Sánchez, Rémy Rochas and Lennard Kämna at the end of stage 1 of the 100th edition of the Tour of Catalunya. Lotto Soudal took all trophies and jerseys with Kron taking the overall lead, points and young riders jersey and with Sylvain Moniquet taking the mountains jersey as well as the combativity award.

Kron proved the quickest to claim the stage and the overall lead in Calella, were he succeeds teammate Thomas De Gendt as stage winner.

“In the Tour of Luxemburg last year I won by beating Diego Ulissi, so I knew I would have a chance today. I did my job in the front group, to stay ahead, but I kept in mind to save some forces. I started the sprint in ideal circumstances, in last position and well protected from the cross wind. It went perfect.”

The break of four formed with some 20km to go.

“When Movistar stopped with its furious action, Sánchez attacked and some others went with him. Initially my teammates Maxim Van Gils and Harm Vanhoucke were also there. In the end, just Kämna, Rochas and me were left. I felt immediately that I had the good legs”

Earlier teammate and neo-professional Sylvain Moniquet was the last survivor of the day’s early break of four. He took the points on the Port de Santa Fe del Montseny, but was swept up on the long descent.

“I had to attack three-four times before getting away in the beginning of the stage. After some 15 kilometres we were gone“, explains Sylvain Moniquet. “I started immediately thinking of the mountains jersey. On that last 1st-category climb, the peloton was coming closer, so I succeeded in dropping the others and managed to pass as first rider on that climb as well. We will see the coming days if we will defend the jersey. Why not. This kind of races suits me better than the first Belgian races I did in the cold and on cobbles. I feel happy!”.

“We show that the Team Management made the right choice”, continues Andreas Kron. “The riders of my generation, like Pogačar, fight all the way, until the last second, and we prove we can beat the bigger names. And this is just the beginning of the season.”