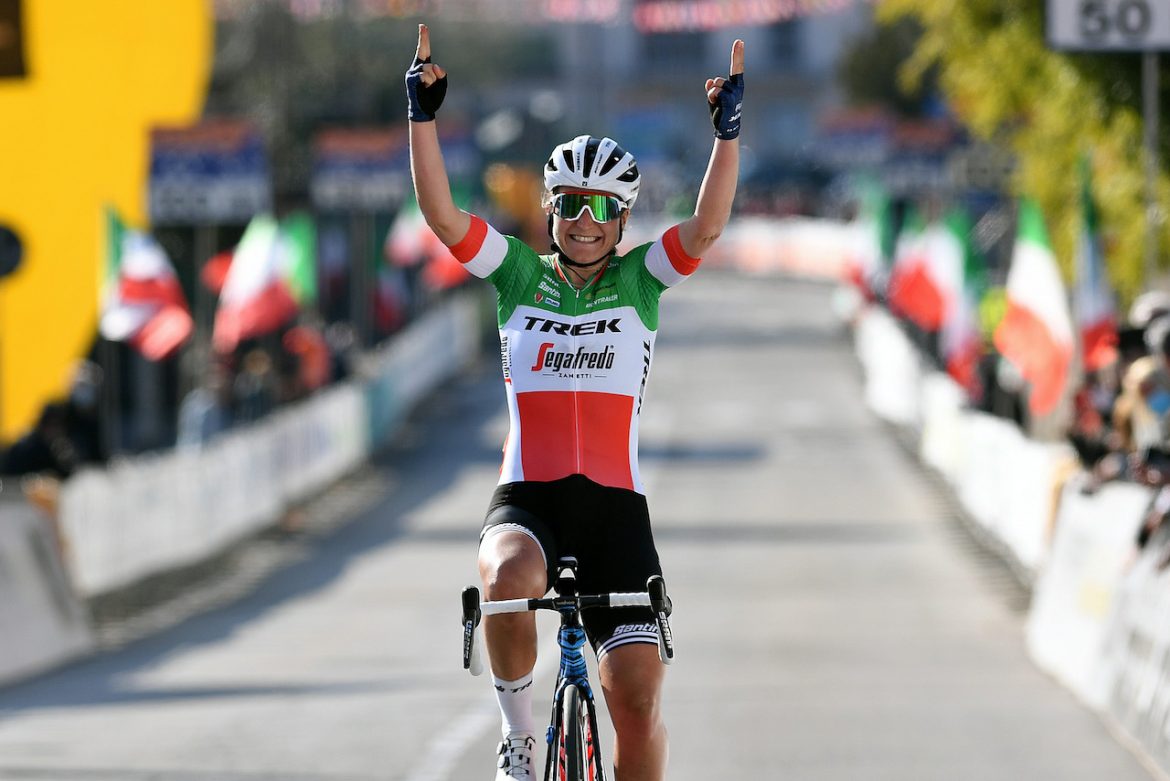 In its 46th edition, the Italian women’s classic was scheduled one-day after the Italian Monument, and is a race that holds as much regard in women’s cycling.

The Trek-Segafredo women took extra motivation into Trofeo Alfredo Binda after Stuyven’s dramatic victory in Milano-Sanremo. Stuyven’s words, ‘all or nothing’ rang true for Longo Borghini as well.

“It’s all or nothing. Jasper inspired me yesterday with that, so I also thought about ‘it’s all or nothing,’” said Longo Borghini.  “Sometimes you have to play poker. If there’s an option to attack, I will always choose to attack.”

“It was planned that I would attack the second last lap and spare Lizzie (Deignan) for the finale because she’s the fastest. As soon as I got a little gap I was thinking about Jasper and what he said, sometimes its all, often nothing, and today was all. As a team we couldn’t be happier. We did a great job, we moved as the best team today in my opinion.

“In the end, my victory was just the cherry on the cake, it was really a team victory because my teammates did a really, really good job.

“My legs felt good from the beginning and I could actually feel that I was strong on the climb which I did in my big ring. I expected someone to follow me when I attacked, and then when I saw I opened a little gap I just went again. I knew this would be a good move for Lizzie if I could make the others suffer if it would be a sprint finish. If they would have caught me I would have just gone again. I really like aggressive racing. Every time there is a chance to attack, I do it because I like it.
“Honestly, for me arriving solo is the only chance to win Binda, but honestly, it didn’t matter if it was me, or Lizzie or someone else because we are a united team, and whoever wins, it’s fine.
“At the beginning, I thought they would catch me, and I am someone who doesn’t believe it until the end because normally I am always caught.  I realized just in the last 200meters that I had won Binda. I turned my head and didn’t see anyone and then could cherish the win.

For Trek-Segafredo, it was massive to win both the men’s and women’s esteemed Italian WordTour races on the same weekend.