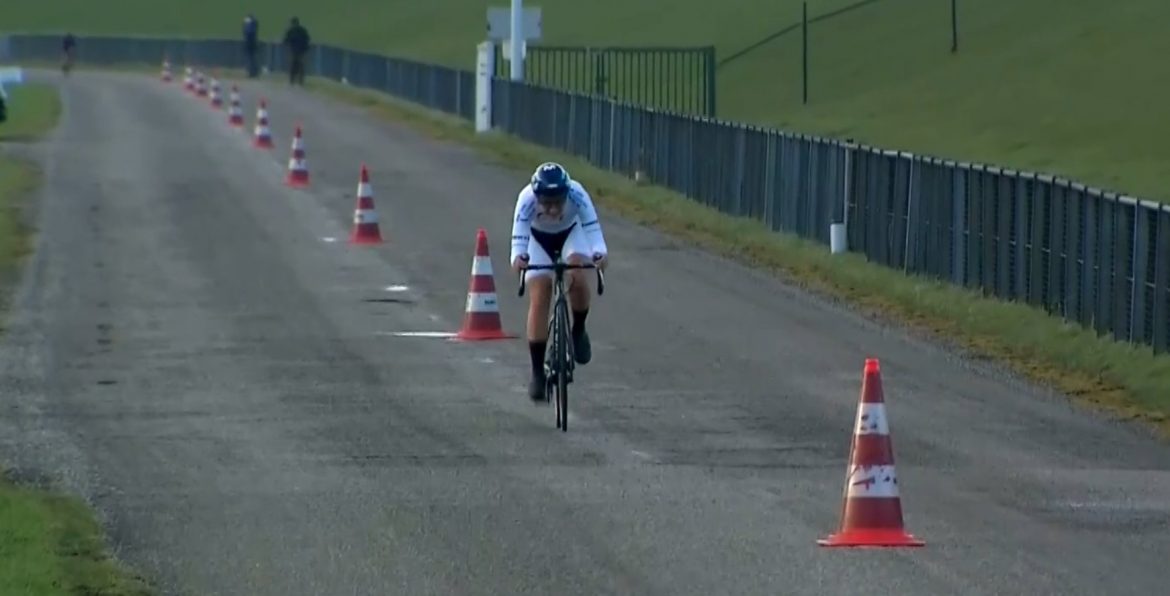 The vicious winds blew in the Netherlands, delaying the start of the time trial by five hours. When the winds subsided enough to get the race underway, Ellen van Dijk kicked up her own storm, blustering through the 14.4-kilometer out-and-back course in a time of 20 minutes and 53 seconds. An incredible average speed of 41.3 km/h in windy conditions raced on a road bike.

“I am just happy that I could win this time trial. I was looking forward to this day, especially after I put a lot of work on my TT bike last winter. I may not have gotten the result of that today, but I made good power, and I am happy with the performance,” said Van Dijk.

The extreme weather delayed the race, extending the start by four hours, and when the strong winds refused to yield, another hour had to be tacked on. It turned into a mental waiting game for the competitors, never easy.
“It was a very hectic day,” agreed Van Dijk. “There was a lot of discussion about whether the race had to go on, and then if we could race our TT bikes, all these kinds of questions. There were lots of different opinions, but in the end, it was good that the decision was made.”  The exposed, flat course was straight-forward: 7 kilometers out into a headwind, turn around, and 7 kilometers back on the same road, with a tailwind. The UCI’s decision to forgo time trial bikes for safety reasons played to Van Dijk’s advantage with the proven aero ability of the Madone.
“Of course, I was disappointed that I could not ride my TT bike, and we had to change around to the road bike, but the team did really well with last-minute changes with the gearing and my position a bit on the road bike. We only had an hour to do all this,” admitted Van Dijk.

“I was happy to have my Madone here, a very aero bike, which for sure was an advantage. In the end, it was just riding as fast as you can.”

In the end, Van Dijk’s legs did the talking – she blasted over the course faster than everyone and the only rider to go under 21 minutes.  The closest competitor, Amy Pieters of SD Worx, crossed the line 26 seconds behind the Trek-Segafredo TT specialist.

“I was a bit worried because when I was riding the winds were like 55km/h and in the end with the last riders it was 40km/h. I saw they were much faster at the turnaround point because they didn’t have a much headwind as I had, but then they also had less tailwind. So the difference was made on the way back,” explained Van Dijk.
Van Dijk, a three-time winner of the Healthy Ageing Tour, takes the leader’s jersey and a 23-second buffer into the final day, a grueling, technical circuit race over the VAM climb. With a strong and dedicated Trek-Segafredo team surrounding her, it will be challenging to take the yellow off her back.

“For tomorrow, we have quite a good gap – over 20 seconds – but tomorrow everything can happen. It’s a very open race, a different race again with a lot of climbing and it will be a lot of interval efforts. We are going to give all we have to keep this jersey of course. It will be exciting; I am in good shape and I am looking forward to it. We will see what we can do tomorrow,” said Van Dijk.