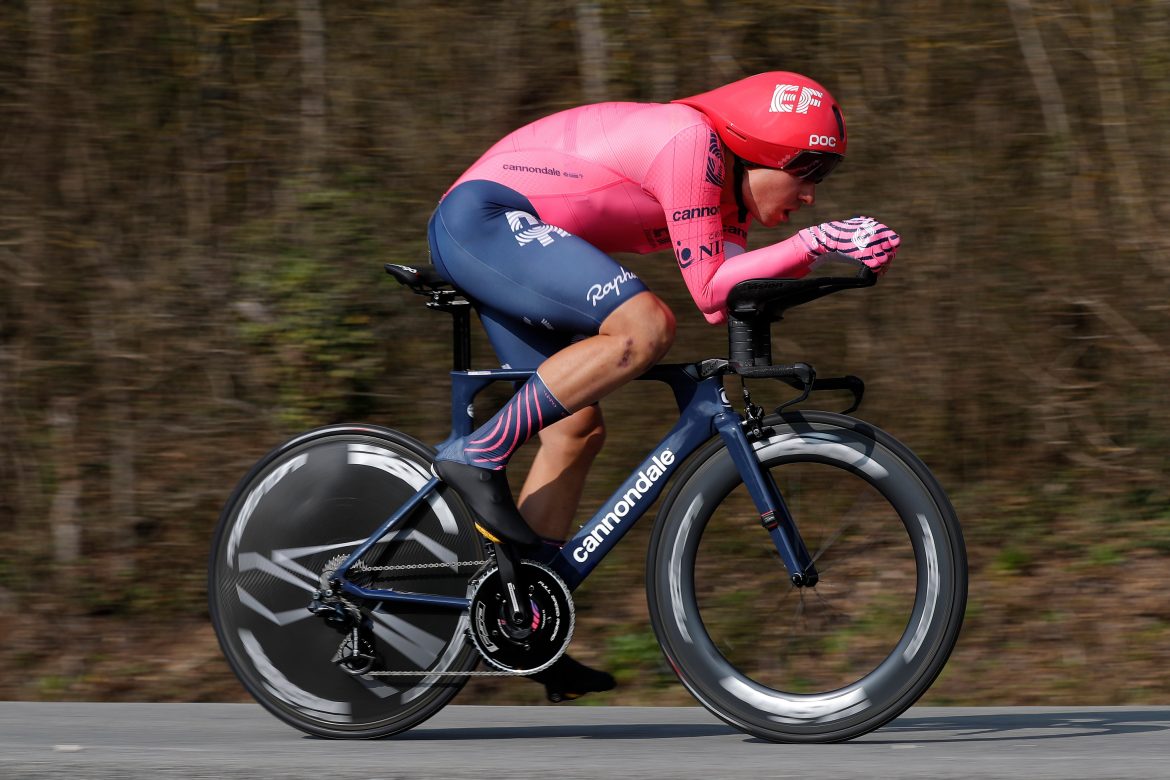 Stefan Bissegger won stage 3 and now wears the yellow jersey at Paris-Nice after a show-stopping sprint to the line in Gien, France.

“It feels really great to show what I’m capable of and to take the win here,” said Bissegger.

His performance at the Paris-Nice time trial shook up the cycling world and few outside the team saw the win coming, as the 23-year-old was up against some of the most experienced and successful riders in the sport. And yet in his first full season as a pro, Bissegger proved that he’s a name that may become more familiar in the seasons ahead.

“We’re gonna have a fun dinner tonight and we’ll use this momentum for the rest of the race. It gave us the confidence we needed to carry forward,” said teammate Neilson Powless.

Today’s stage was an incredibly difficult one according to Sport Director Andreas Klier. “It was a very exciting ride regarding the power output and the steering and just the overall risks you had to take,” said Klier. “Stefan knew very well what he wanted. And today everything came together and he was the fastest. Every second counted and he knows very well how to time and pace a TT.”

Racing for the top spot today demanded riders take chances and time their efforts well. “It was really technical. You had to take risks at the right corners and be patient in other corners as well. I think I managed it well, so I’m super happy about that,” said Bissegger.

Bissegger’s talent, notably in the time trial stages, was recently on display at the UAE Tour where he placed second in the TT. “Time trials definitely suit me and I’m very happy. It’s the second big stage race of my career,” said Bissegger.

“What a ride by Stefan — he’s just shown the sport what we’ve been seeing at the team since he came on board. He’s a huge talent and rides with tenacity and discipline. TT wins mean a lot of us, because in addition to the ride itself, it showcases a lot of behind-the-scenes work, too.  It’s a tribute to our partners at Cannondale, POC, Rapha, Vision, FSA, and Vittoria who prioritze innovation, no matter how painstaking it can be. The whole sports science team works incredibly hard. This is a real tech-geek win. Low CdA wins the day.”

Bissegger grew up around the green pastures of Switzerland and is now a stage winner on the WorldTour. He’s been racing bikes for nearly half of his life and did his first road race when he was 10 on a bike borrowed from his local bicycle store.

“The guy from the store told me I couldn’t start the race on the bike I had been riding around on as a child,” Bissegger said. “He gave me a bike of his. That bike and that race started it all. And the funny thing is, the guy who gave me the bike, he’s now my trainer. I was 10-years-old. He’s been by my side for 10 years now.”

The training has certainly paid off as he now goes into stage four tomorrow as the overall race leader. Not to mention, having the yellow jersey is a particularly big advantage in a race like Paris-Nice. “The roads are small so it’s always an advantage when you can be at the front. Hopefully he can hold onto it for a few more days and just enjoy every minute of it,” said Powless.