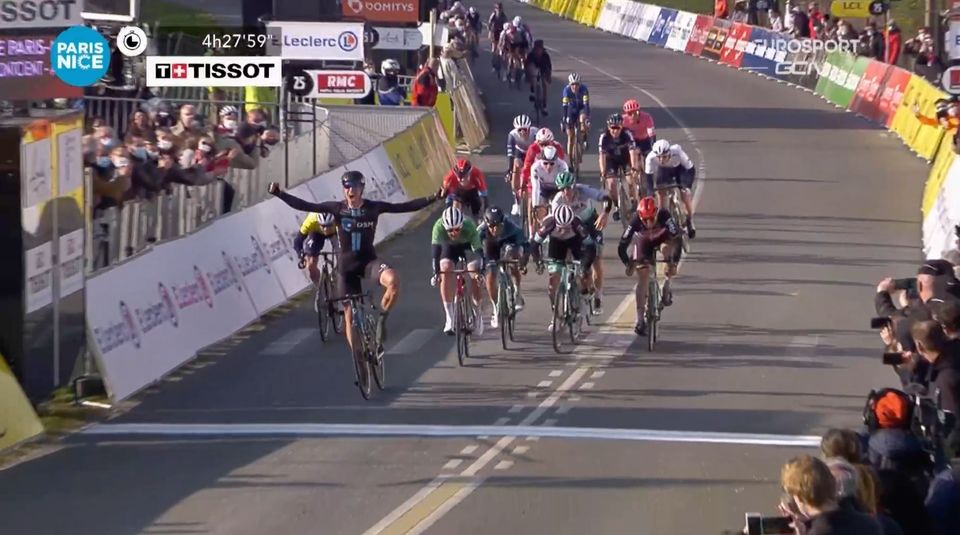 Mads Pedersen’s third place in Stage 1 in Paris Nice was topped by a second place in Stage 2 as he continues to capitalize on first-rate leadouts from his Trek-Segafredo teammates.

With Alex Kirsch and Edward Theuns taking up the early watch with some two kilometers to go, Jasper Stuyven finished off their work, his final push with Mads on his wheel, timed perfectly.  It was textbook.  Except for one rider – Cees Bol – had faster legs and spoiled a win.

Still, Mads crossed the line in second place, a second-straight podium for a rider who’s finding his niche in fast finishes. It’s quickly becoming apparent the young Dane can handle anything thrown his way and come out on top of many riders considered faster.

What happens on the road in bunched endings is a crazy story. Sprint finishes are sheer madness: the peloton, inches apart (or less), flying around corners and roundabouts at top speeds, all while trying to avoid road furniture (and each other) on two dreadfully narrow rubber tires. It’s unlike anything us mere mortals can comprehend.

It takes a big engine, superb bike handling skills, guts (perhaps a little craziness), and trust. All qualities the Trek-Segafredo leadout (aka Classics) squad owns.  Add a close friendship you don’t often find in pro teams, and you can see what makes this team so unique.