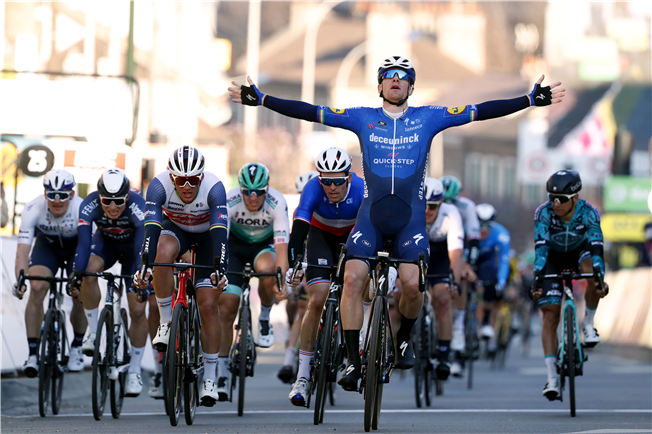 Meet Sam. He loves France, riding his bike and winning. And when all these happen at the same time, then he’s over the moon. It was the case last year, when he donned Le Tour’s green jersey on the famed Champs-Élysées, and again on Sunday, not far from Paris, in Saint-Cyr-L’Ecole, where he took the glory at the end of a chaotic stage 1 of Paris-Nice.

On paper, the 165.8km opening day should have been a quiet one, but the attackers had other plans and as consequence they attacked in waves inside the last 40 kilometers, forcing the peloton to up the tempo and kick off a frantic chase that stretched out the bunch and put many riders in the red. Unsurprisingly, Tim Declercq played an important role once again, helping with the pursuit of the attackers, whose adventure was brought to a halt with eight kilometers to go, the mass gallop becoming inevitable at that point.

On the hectic uphill finish, Sam Bennett stayed in a perfect position until the last 200 meters, when he shot out of the pack at a ferocious speed and sprinted to victory with his hands on the top of his brake levers, putting several bike lengths between him and his opponents. It was the fourth win of the Carrick-on-Suir native in the “Race to the Sun”, after the ones of 2017 and 2019, one that brought him also two jerseys, yellow and green.

“Coming into the race I didn’t know how my shape would be, because racing here is different from the UAE, here it’s full gas the entire day and today it was another test to see where the legs were. We were a bit blocked in the last kilometers and could come to the front only with two kilometers to go, which was thanks to Michael, who always stays calm and knows what he has to do. I was confident and I just waited for the right moment to go and all I can say is that I’m happy with the kick I had and my victory.”

“The team was again incredible and I am happy I could finish off their incredible job. The stage was stressful, as everybody was motivated and there was quite a fight for positioning, but I am glad that I could come on top. It’s been a great weekend for Deceuninck – Quick-Step and I’m delighted I could contribute to it. Now I will enjoy wearing this beautiful yellow jersey, it’s really special to have it”, said Sam, the first Irishman in 31 years to lead Paris-Nice.