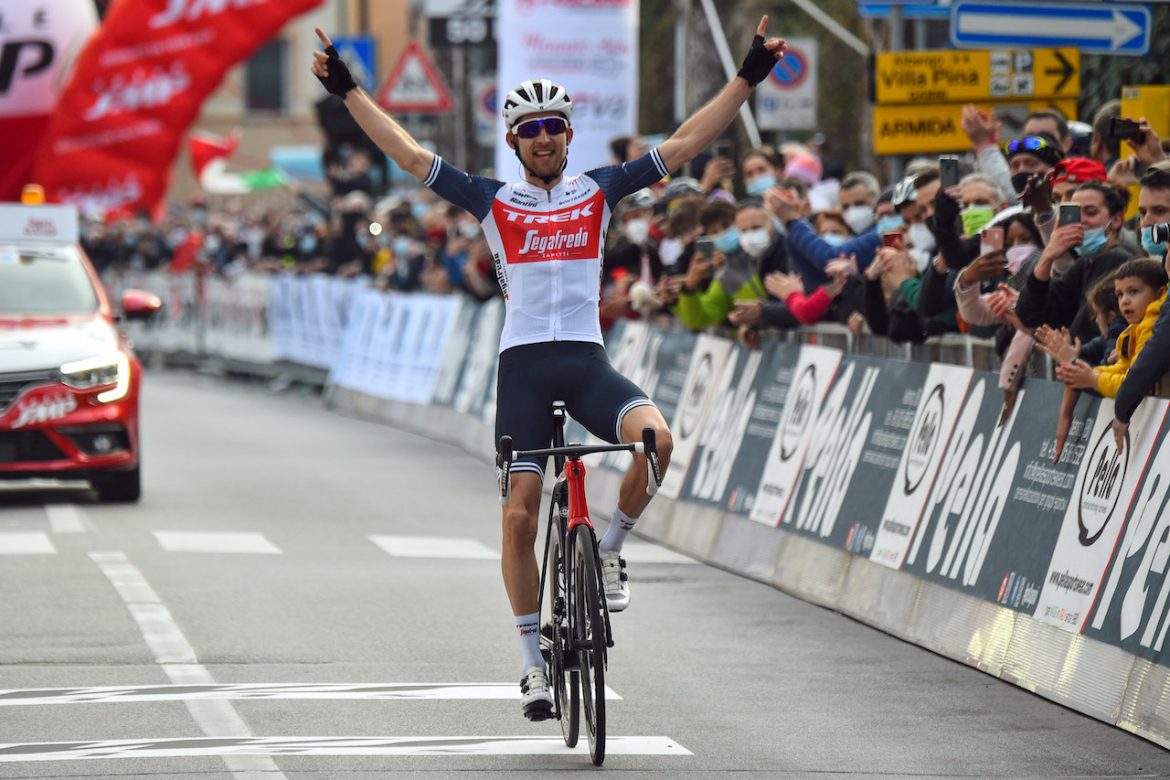 Bauke Mollema soloed to the win in Trofeo Laigueglia, playing off teammate and last year’s winner Giulio Ciccone’s presence in a select group of riders in the closing kilometers of the hilly Classic.
“We had a strong team here, and we were the only team with two riders in the 8-10 riders at the end with 15kms to go. I saw a good moment; Cicco was in my wheel, so I attacked,” explained Mollema. “I had a big gap quite fast. It was not easy to keep the tempo to the finish line, but yeah, I am super happy that I made it.”
“It’s super nice to win here, and I am super happy to start the season like this. I have felt good the last few weeks, and I wanted to start the season in a good way, and it’s nice to have two wins now,” he added. “We have already five wins at the beginning of March – in Belgium, Italy, and France – I think the team is riding really strong, and hopefully we can continue like this in the other Italian races coming up this weekend.”
Trek-Segafredo came into Trofeo Laigueglia with a strong team and the No. 1 bib worn by last year’s winner Giulio Ciccone. When the race hit the demanding local laps, the team was the first to bring the hammer down with attacks from Giulio Ciccone and Vincenzo Nibali.
After nearly 200 kilometers of hilly parcours, everything exploded. An attack by Egan Bernal on the main climb of the circuit further pared down the bunch, and with 15 kilometers remaining, a select group of seven riders emerged. Trek-Segafredo was the only team with two.
Sensing a moment of easement amongst the leading group, Mollema’s winning attack came unexpectantly on a flat section of road. Having Ciccone in the chase group put a mindful uncertainty into the chaser’s heads, giving Mollema a quick lead. When the gap fell to some 15 seconds on the climb and Ciccone lost contact, there was a brief moment of optimism amongst the chasers.
But Cicco dug deep and battled back before the top. The chasing group had their unwanted cargo return. Advantage: Trek-Segafredo.
Mollema’s lead increased: with 10kms to go, he had 18 seconds; at 8 kilometers, it grew to 20. Five kilometers from the line, Mollema held a half minute. It was game over.
“In the last 20 kilometers, the race was really hard,” Mollema continued, “and I saw the good moment to attack, and luckily I could hold it to the finish line. This was a race, a parcours, that suited me well, and we had a strong team here, so the goal this morning was to win the race. When I did the recon of some of the course yesterday, I had a feeling this was a race that suited me well with short climbs.
“There were a lot of strong riders today at the start and that makes it even nicer to win. I really wanted to be in good form and get results in these races, and also Saturday in Strade Bianche and Sunday in GP Industria, ” said Mollema. “Yeah, the last few years it has gone well for me in Italy actually – Lombardi, GP Beghelli, and a win in Coppi e Bartali.”