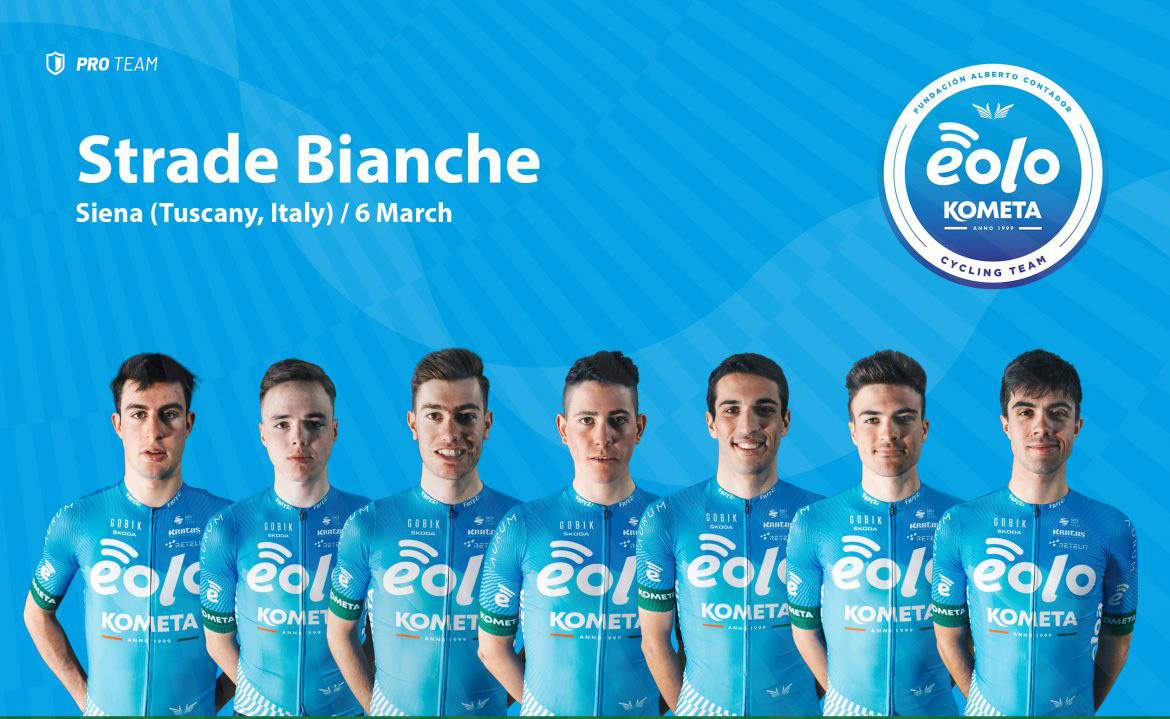 Another debut. Another first time. Another day made of emotions with a hint of disbelief. On Saturday the EOLO-KOMETA team will be at the start of the fifteenth edition of the Strade Bianche: the first UCI World Tour category race for our team after the jump to the Professional team. And this alone would be enough to convey some of the adrenaline felt by the seven riders chosen to be at the start, which is the same as all the staff ready for a new chapter in the history of this team: an important race, a beautiful race.

And this alone would be enough to convey some of the adrenaline felt by the seven riders chosen to be at the start, which is the same as all the staff ready for a new chapter in the history of this team: an important race, a beautiful race. Which will depart from Siena to return to the city of the Palio after 184 km with the finish line in Piazza del Campo, one of the most beautiful and famous places in the world. In between, so much beauty and so much effort: the 63 kilometers of dirt road divided into 11 sectors that give the race its name, the suggestive hills of Montalcino adorned with its vineyards, the very hard climb of Porta di Fontebranda which at 500 meters from the finish is often decisive to determine the final winner. And then, another reason to tie ourselves even more to this race, here is the Eolo brand to sponsor the Strade Bianche 2021.

And here they are, our seven standard bearers: Davide Bais, Erik Fetter, Sergio Garcìa, Arturo Gràvalos, Samuele Rivi, Diego Sevilla and Daniel Viegas. They are awaited by an appointment that means many things: a debut, a prestigious race, a very hard race, a splendid race. An appointment for which each of them knows they are ready.

Samuele Rivi: “The Strade Bianche will be my first WorldTour race, so I don’t really know what to expect. Indeed, I know: I know that a lot, a lot of effort will be waiting for me. But that, the effort, is always there and in all races. What is certain is that it is wonderful to make my debut with my first professional race in Italy in such a race”.

Arturo Grávalos: “This is a race for which I have a special affection. In Giro U23 I had the opportunity to tackle several stretches of dirt in one of its stages, and I have wonderful memories of that day. I managed to stay in the leading group in the important moments and to fight for the victory. This edition of the Strade Bianche is the first race of our season. It is almost a monument. A modern monument within the WorldTour. I would like to do very well this year and I can’t wait to start: I dream of being able to play it”.

Diego Pablo Sevilla: “I am very motivated by this opportunity. This will be a debut, and to the uncertainty that there is always in a debut is also added the uncertainty due to the level of this race. We are working well, with a lot of desire. The Strade Bianche is one of my favorite races and I usually watch it on television. On the day of the Strade Bianche in I have a habit of finishing my training early to go home early and look at it all. Now I have the opportunity to experience it from the inside: and if seen from the outside it looks like a very difficult race, running it will undoubtedly be another thing. I hope to make a good impression. It is a race in which it is important to always stay in the top positions because then it becomes difficult to keep the lead of the group given the many strong riders fighting for the victory. It will also be important to be present in a possible break: this is a race of enormous prestige”.